HISTORY OF OUR SCHOOL

Bishopswood School opened in 1977, at Gallowstree Common, to serve the South Oxfordshire, Reading and Caversham areas. It was a new building with six classes, however, soon after opening, the headteachers of Bishopswood and Sonning Common Primary proposed moving a group into the mainstream school and over time additional classes were established. A new purpose-built Primary Department, The Northfield Building, was erected on the campus in 2002.

In 1984 secondary-age pupils were provided with a classroom at Chiltern Edge Comprehensive School. Two years previously, the former Parkview School and the Mary Sheridan Unit of Borocourt Hospital were merged with Bishopswood. At this time our pupils were only entitled to full-time education until the age of 16, but following a challenge by parents, the Secretary of State ruled to extend provision up to the age of 19. A relevant course was established for post 16 provision at  Henley Technical College, now The Henley College, where we have been able to establish very significant links over the years.

In 1986 the Education Committee agreed to fund the completion of the process by providing new accommodation at Sonning Common Primary and Chiltern Edge Secondary so that all pupils, whatever their level of need, could benefit from meaningful inclusion opportunities.

In 1992 the Bishopswood Good Practice Transferred was produced.  The full report is available at the bottom of this page. 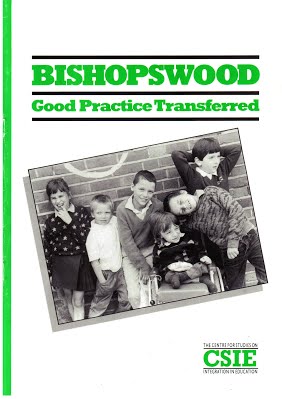